You are here:
Partners 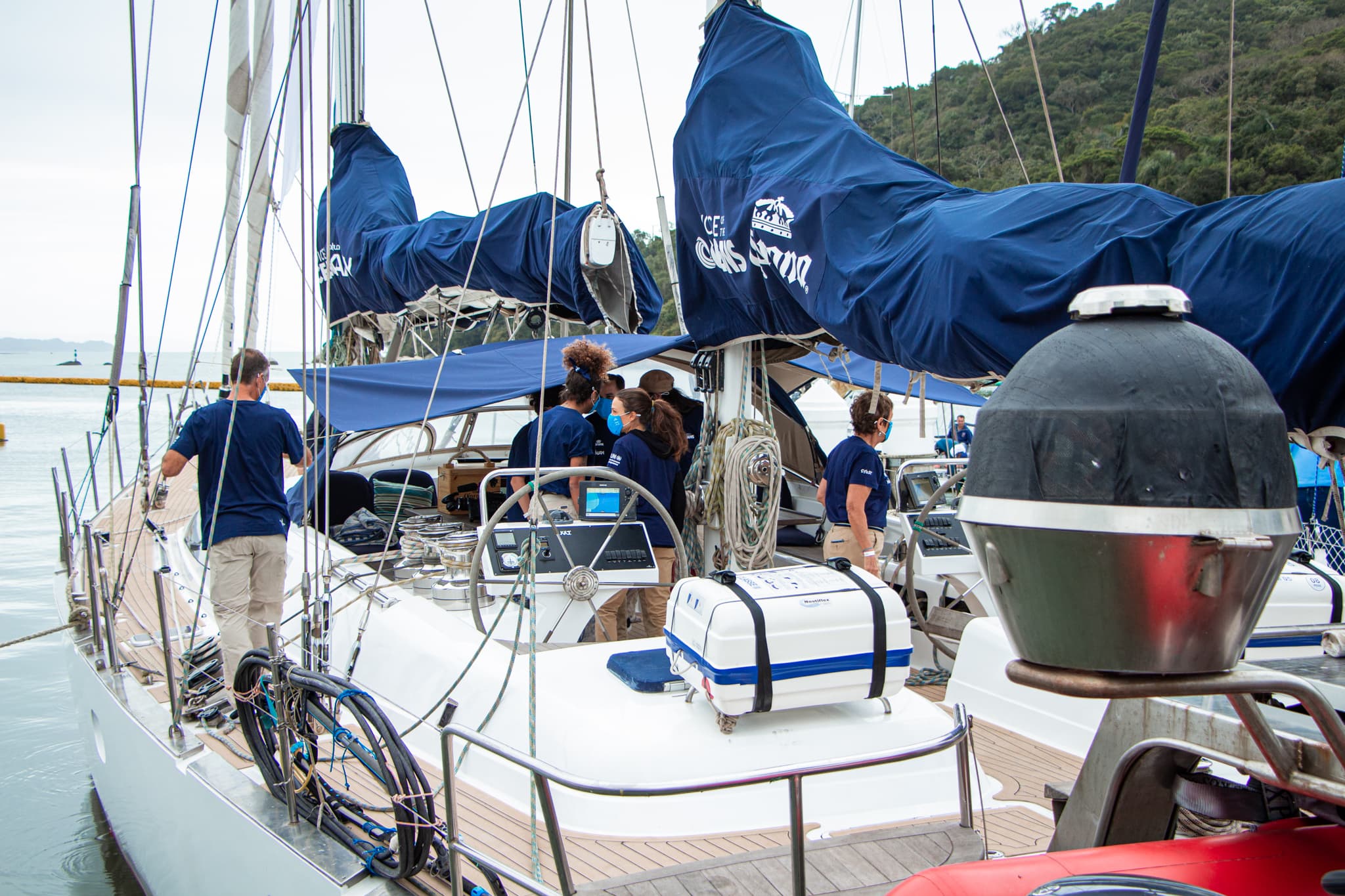 For at least the next two years the Schurmann Family are in search of innovative solutions to fight seam pollution with the United Nations Environment Programs worldwide support. The Kat sailboat crew will mobilize 60 destinations, including 11 Brazilian cities, by promoting entrepreneurship, science and education.

Balneário Camboriú, August 27, 2021 – In order to raise awareness among the world’s population concerning waste in the oceans, focusing on plastics, the entire Schurmann Family – Vilfredo, Heloisa and their children Pierre, David and Wilhelm – rejoins aboard the Kat sailboat to start the Voice of the Oceans worldwide expedition. Launching on Sunday, August 29, in Balneário Camboriú (SC). With the global support of the United Nations Environment Programme (UNEP), the boaters and the other crew members of this two year mission will visit 60 national and international destinations, from Brazil to New Zealand.

The initiative – which also has Plastic Soup Foundation among its international supporters – is intended to witness and record the level of pollution in the seas, in addition to navigate in search for innovative solutions to fight such issues. Its ultimate goal, from Brazil to the world, is to raise awareness and engage people around the planet about the need for urgent actions to preserve the waters.

After going three times around the world for the last 37 years, the Family has had the opportunity to closely observe the increasingly polluted oceans and their undergoing changes.

“All of this, not only affect marine life, but also populations in general. It is, in fact, a very urgent matter. And this is the reason for the UN to define the 2021 to 2030 period as the Decade of Ocean Science for Sustainable Development. We truly believe that it’s possible to change such scenario together, by the means of a great global current of good.”

“It is very sad to know that so many animals die from plastic ingestion every day, turtles, whales and sea birds included. After all, about eight million tons of plastic reach the oceans every year. This number could
be tripled by 2040, if we do not bet on containment measures to avoid an even worst situation. We need
to change our attitude as quickly as possible”

In practice, the Voice of the Oceans’ crew has three pillars of action at stake in order to achieve an effective transformation. The first of them presents an entrepreneurial aspect by working together with the SPIN accelerator to focus on finding industries environmental solutions. The idea is to encourage entrepreneurs and startups whose proposal is to find solutions to reduce or eliminate the use of plastic for the industrial sector.

The second pillar, a scientific one, was developed in partnership with Infinito Mare, which is a company founded by environmental and marine scientist Dr. Bruno Libardoni. It consists on investigating the many impact levels undergone by the oceans. Three main goals have been set: to investigate the water and oceans biogeochemistry quality; to analyze wider areas of the oceans, with the help of drone flights and satellite remote sensing, as well as to build the Voice of the Oceans Hub, a global network to quickly make reliable data available to the scientific community and public opinion in general. Another scientific collaboration includes the participation of the Conselho Científico Consultivo (a Brazilian scientific advisory
board), which is composed by 14 renowned Brazilian and foreign scientists.

Finally, there is an educational pillar which, through the partnership made by Voice of the Oceans, Instituto IRAPA and Instituto Supereco, should carry out educational initiatives, including the creation of educational material and gamification; training workshops focusing ocean studies, waste and sustainability, and a transversal and transdisciplinary proposal on the same subject, to be included in the educational curriculum.

With an eight-member crew aboard, on a sailboat named Kat, Voice of the Oceans will visit 60 strategic locations on the planet. Including some places where many kinds of plastic items accumulate, carried by the see currents, from different parts of the world. The Brazilian stage begins in Balneário Camboriú, Santa Catarina, and it also includes other 11 destinations: Santos/SP, Ilhabela/SP, Ubatuba/SP, Paraty/RJ, Rio de Janeiro/RJ, Búzios/RJ, Vitória/ES, Abrolhos/BA, Salvador/BA, Recife/PE and Fernando de Noronha/PE. It will happen from September to November.

Afterwards, the expedition will be headed to the Caribbean region, the Atlantic coast of the United States, the Bermuda archipelago, then returning to the Caribbean islands, Mexico, crossing the Panama Canal, sailing to the Galapagos, from the South Pacific Ocean to Polynesia, and it will finally arrive in New Zealand.

All through this journey, the Schurmann Family will involve scientists, educators, environmentalists, entrepreneurs, CEOs, influencers, opinion makers, NGOs, public managers and the civil society. Proposals to reverse our seas destruction scenarios will be presented, as well as entrepreneurship and educational actions will be involved. “Voice of the Oceans goes way beyond our family. It is about a collective movement in favor of our oceans, our planet and our lives. Everyone can be that voice. And just like the oceans do, our movement also has no borders. It is an initiative from Brazil to the world”, highlights David Schurmann.

“Family Schurmann was, from the beginning, a fundamental partner of the Clean Seas campaign. In addition to witnessing and recording, firsthand, the condition of marine and coastal ecosystems, the Voice of the Oceans expedition is also a great opportunity for us to map out solutions that are already underway. Across the world, 63 countries have already committed to Clean Seas, which represents 60% of the planet’s coastal area, and are reviewing their legislation to ban disposable plastics. More than a thousand organizations have joined together for a circular economy for plastic. Together and together we can reverse this tide.”

Regina Cavini, Deputy Representative of the United Nations Program for the environment.

In addition to the global support of the United Nations Environment Programme and the international Plastic Soup Foundation. The expedition’s first sponsor brands are Kaiak (Natura), Corona (Ambev), Faber Castell and Sabesps.

“More than a Marketing project, Voice of the Oceans is an ESG initiative to our partners”

It is worth mentioning that, in addition to all the innovations and sustainable solutions which are present on the Kat sailboat. Voice of the Oceans also adopts measures capable to neutralize carbon emissions generated during its preparation and the expedition. Therefore, not only involving the vessel itself, but also our São Paulo office. In a partnership with Starboard, we are already calculating the quantity of generated emissions to be neutralized with the planting of typical coastal ecosystem mangrove species.

Named under Heloisa and Vilfredo’s daughter’s name, who died in 2013, the Kat has six cabins, two saloons, a galley and three bathrooms. Among the sailboat’s differentials, we are counting on a hydraulic retractable keel and many sustainable solutions. The sailboat uses wind, water and solar clean energy, along with low-consumption generators and a sewage treatment system. Some improvements were specifically thought for the Voice of the Oceans project, such as increasing our clean source of energy from 75% to 100%, adoption of Lithium batteries, as well as ultraviolet wastewater treatment. In addition, all waste produced onboard is properly treated. Also, the boat has a composter to treat organic waste and a compactor to store recyclable waste.

In 1984, after ten years of planning and preparations, Vilfredo and Heloisa left Santa Catarina, with their children Wilhelm, David and Pierre – aged 7, 10 and 15, at the time. They intended to make a dream come true: to go around the world aboard a sailboat. During their first great adventure, the Schurmann Family spent ten years at sea and, thus, they became known as the first Brazilian family to travel around the world aboard a sailboat.

Hence, there have been three trips around the world so far: The 10 anos no Mar (1984 – 1994), the Magalhães Global Adventure, with their daughter Kat Schurmann on board (1997 – 2000) and the Expedição Oriente (2014 – 2016). In addition, so many other miles have been sailed along the Brazilian coast and other seas around the world. Now, the Schurmann Family is leaving, along with its crew, for the Voice of the Oceans mission – which can be accompanied by the @vozdosoceanos official social networks, with partners and supporters. Like the last Schurmann Family’s great adventures, the new expedition will also be part of a monthly highlight on the Fantástico TV show, along with other expected showcases on TV Globo and other spontaneous media generation.

World Sailing and ICF are presented with IOC Carbon Action Awards!
May 4, 2022

PWA and SOMWR Set Deep Roots For The Environment’s Future Through Watersports
Jan 24, 2022
ABOUT STARBOARD BLUE