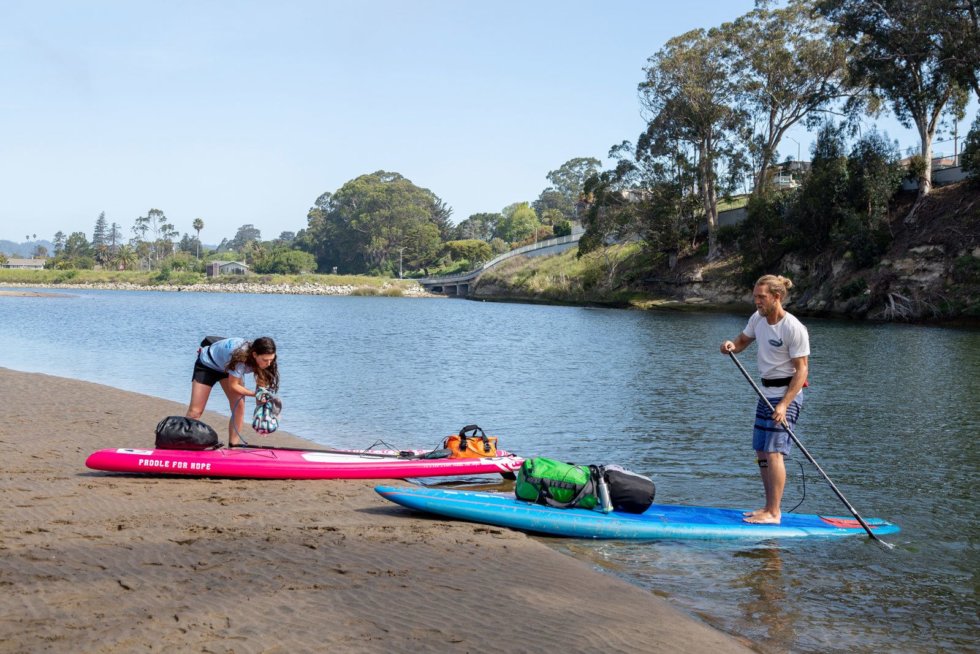 Do you know what are the implications of a massive oil spill really are?

In the wake of Earth Day 2018’s global initiative to beat plastic pollution, April 23rd, Celine Jennison and Christian Shaw of Plastic Tides paddled down the San Lorenzo River in Santa Cruz and across Monterey Bay to their destination at Moss Landing, a 17-mile stretch of ocean in an area teeming with wildlife in an effort to fight offshore oil drilling.

Their mission was to “Stand Up to New Offshore Oil” by using the crossing to bring attention to the growing threat of new offshore drilling, how it connects to the plastic we use everyday, and the opportunity to mitigate climate change through regenerative perennial agriculture.
Following the shoreline from Santa Cruz to Capitola, the pair wound through kelp forests past otters, harbour seals and surfers enjoying a decent swell along Santa Cruz’s east cliff. The infinite amount of life they encountered in this short 17-mile stretch of water served as a brilliant reminder of what’s at stake.
Passing Capitola en route to Moss Landing, Jennison and Shaw found themselves with an unforeseen dilemma: The beach at Moss Landing was nowhere to be seen, nor was much of anything for that matter. What was supposed to be a beautiful clear day turned misty and socked in with heavy fog. The direct heading south would be taking them further and further from the shoreline as it curved eastward.
Not wanting to sacrifice too much ground, the partners paddled into the mist.

Jennison and Shaw navigate through the fog on their way to Moss Landing on a mission to stop offshore oil drilling | Photo: Grace Grignon

“The paddle was challenging in ways I didn’t expect,” said Shaw. “On a nice sunny day there’s a smokestack that can be seen clear across the bay to aim towards, but that day we had no such luxury.”
Paddling what felt like directly out to sea, their track would take them nearly three miles offshore, veering left back towards the shore and correcting in the disorienting mist all the way.

“We could barely see Pleasure Point in the distance directly behind us, and could just make out the tapering coast to our port,” said Jennison. I used the incoming swell as a compass and kept the faint shoreline to my left.”
After paddling for hours without a clear end in sight the smokestack at Moss Landing finally came into view, but it would be a few more hours still before the duo gleaned safe entry into the harbor. When they finally reached the pylons, a motley crew of friendly harbor seals and resident otters were there to greet them.

The Plastic Tides team stepped off their boards to set up camp at 6:30 pm after spending more than eight hours on the water and putting more than twenty miles behind them. Celine, not accustomed to paddling such distances, had lost all feeling in her feet, albeit temporarily.
The plan had been to continue on the next day to Monterey but due to extenuating circumstances, the trip was cut short. The team hopes to finish the paddle in the near future, but the mission is already considered a success. They braved the open expanses of Monterey Bay and shared the journey with as many people as possible to generate awareness and remind us all to stand up for our planet. -Plastic Tides
For another way to stand up for the planet, sign this petition co-hosted by Surfrider and Patagonia to stop offshore drilling.