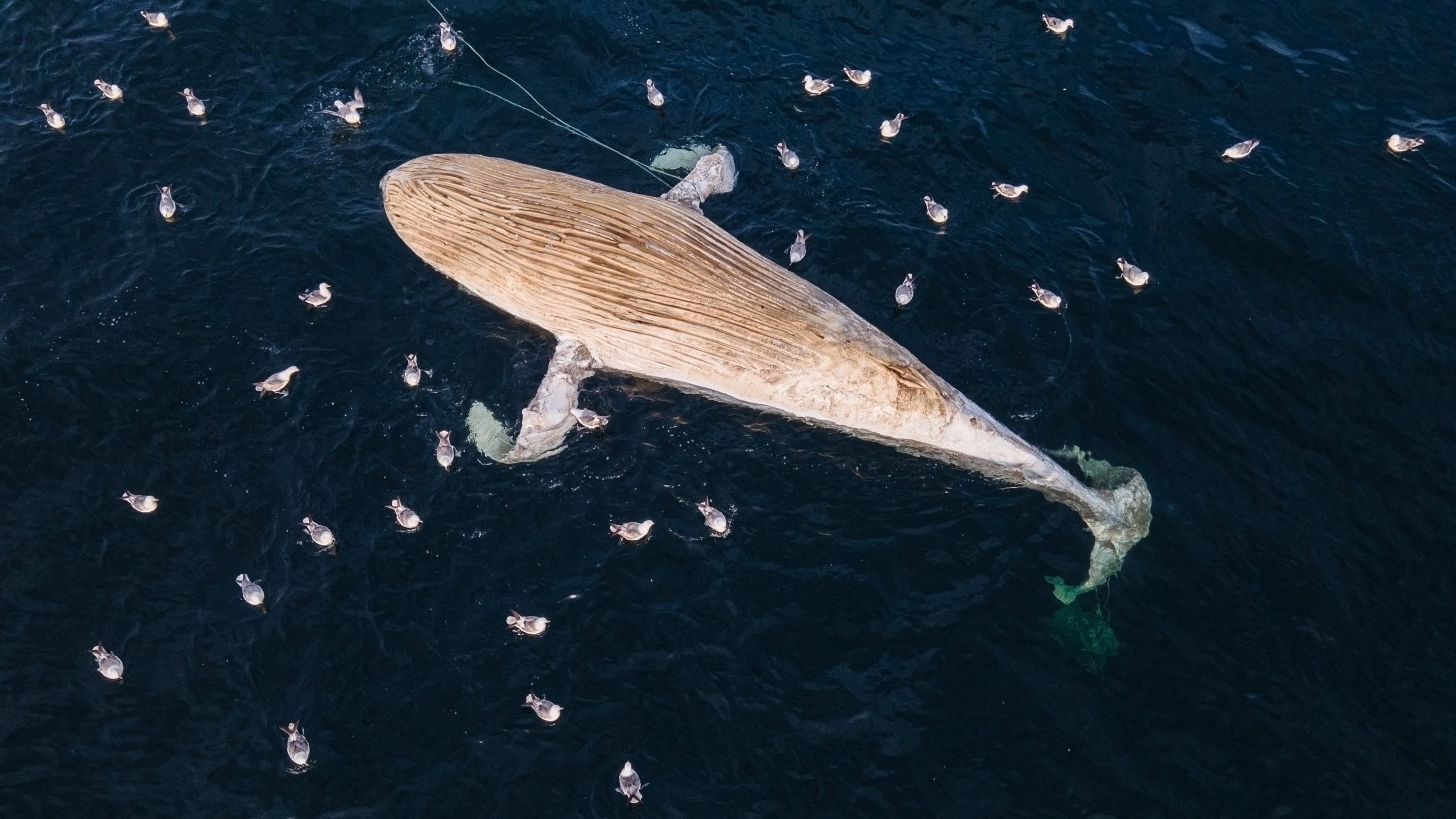 Today we are sharing the Press Release from Cal Major who found a dead Humpback Whale. Major has recently finished her expedition around Scotland, UK. Additionally, the expedition’s aim is to raise money for her charity named Seaful which helps even more people connect to the beautiful nature of the sea.

Take action today and sign this petition from Surfers Against Sewage urging to place the Oceans at top of the COP 26 agenda!

A paddleboarder has come across a dead humpback whale calf a mile off the coast of Lybster, Caithness.

The whale calf, believed to be less than a year old according to its size, was found with ropes and a lobster pot severely entangled in its tail, with ropes and buoys extending off the pot. The body was already partially decayed, suggesting it had been dead for 1-2 weeks. The suspected cause of death is drowning as a result of entanglement. In some species of whale, entanglement is considered the primary cause of death in Scottish waters.

Footage of the entangled whale calf on social media has garnered emotional responses from thousands of people both within the marine conservation community and fishing industry and the general public at large, shocked by this discovery. Although this is not an isolated incidence, it is unusual to find a whale carcass still at sea with the fishing gear attached.

Cal Major, a vet and world record stand-up paddleboarder, is currently SUP-ing around the Scottish coast, having set off from Glasgow in mid May.

Her expedition is raising money for Seaful, the charity connecting more people to the sea. She is visiting local people and communities along the way, exploring our human connection to the ocean.

She is also investigating the crucial role that our ocean plays in the climate and biodiversity crisis ahead of COP26, which is being held in Glasgow this November, and our need to properly protect the ocean from destructive human activity.

“The ocean is our planet’s life force, creating the oxygen in every second breath we breathe. In that regard we are all connected to it, and all have a stake in its health, which in turn is inextricably linked to our health. And yet out of sight and out of mind, the importance of our ocean is often overlooked, and devastating harm is being done without us being able to see it.

“This whale is just the tip of the iceberg – a truly shocking sight and one which is a very stark and visual reminder of how vulnerable wild animals, even some of the largest in the world, are to man’s actions. Ocean ecosystems have been over-exploited and devastated over decades of destructive fishing practices and pollution, and this destruction is allowed to continue despite all we now know about how vital a healthy ocean is for our planet, and the ecosystem collapse that we are directing it to.

“I’ve heard the stats about the vast number of marine mammals dying every year as a result of entanglement, but seeing it for myself has been truly heartbreaking. Entanglement is just one issue facing whales and dolphins; overfishing, bycatch, dredging and trawling (which are hugely damaging to the seabed) and pollution are all unbalancing the ecosystem and killing marine life.

“When will the Scottish and UK government sit up and take action to properly protect our seas? When will they take the health of our planet seriously?

Our ocean has incredible power to rejuvenate, but it needs to be given real protection – not the current status quo of Marine Protected Areas within which destructive practices are often still allowed, but enforced and properly managed marine parks where nature is allowed to recover and thrive. This is of benefit to every person living on this planet, and we all have a right to demand it” says Cal.

Cal hopes that ocean health will be brought higher on the agenda for COP26, and ambitious protection measures enacted urgently. She hopes that the climate and nature crises will be treated as crises. She also, through the charity Seaful, hopes to help reconnect more people to our seas, for the mental health benefits that being there can bring, and to encourage stewardship of our blue spaces.

Coverage of this story can be found in the John O’Groats Journal.

PLEASE NOTE: Experts and organisations locally have been consulted. For legal reasons, we have to point out that finding this cetacean entangled in such a manner does not constitute proof that it died that way.