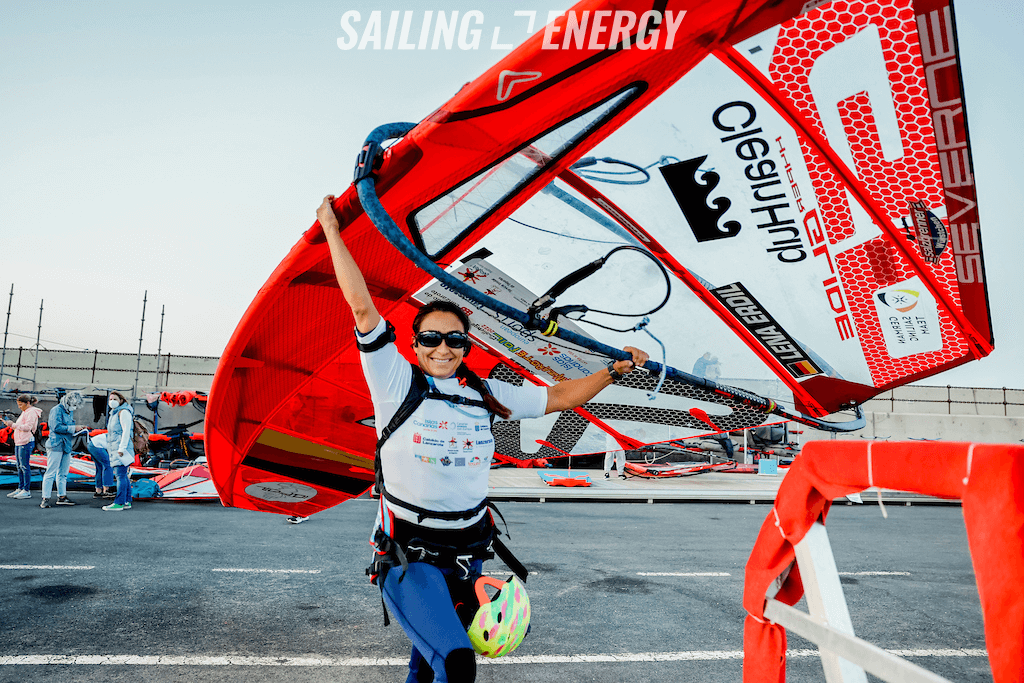 Lena Erdil took on the extreme challenge of windsurf foiling around Lanzarote Island on her iQFOiL set. Sailing 203KM over 9.5 hours. For each KM sailed, CleanHub are collecting 2.46 KG. Resulting in 500kg of plastic trash removed from it’s pathway to the ocean!

Slightly different to Lena’s usual olympic training, on the 6th of February 2022 Lena becomes the only woman to complete the challenge and successfully foil around Lanzarote. The project came about as an idea to raise awareness to the problem of pollution in our Oceans. Lena did more than showcase the problem, she also wanted to show solutions like Clean Hub. CleanHub offers people and companies the ability to offset their plastic footprints and or collect on their behalf, as like for Lena Erdil’s Lanzarote Foil Challenge #ForCleanOceans.

Huge swell, no wind, crashing and getting tangled up in fishing nets, 45-knot gusts that almost bring her to the breaking point. Lena explains that the challenge was certainly a lot harder than she expected.

“I was expecting the rounding to be extremely physically and mentally challenging due to the sheer length, but that I would fight the elements while foiling in the most extreme conditions of my foiling career was far beyond any expectation.“

Lena’s partner in collaboration #ForCleanSea’s is collecting 500 KG of trash for her right now.

Check out the live update here.

What Equipment did Lena use:

Lena Erdil sailed on her iQFOiL set for the Lanzarote event. It’s the new olympic windsurfing equipment and it’s just so comfortable and stable. Foiling and especially the iQFOiL Equipment really opens up new worlds. In terms of being able to sail extremely long distances in a variety of conditions. The equipment will float you through super light winds while still being manageable in even the craziest of conditions. Like we saw in the challenge. I wouldn’t want to have been on any other equipment then I was for the challenge. I only made slight adaptations to my set up and stance to spend less energy.

Welcome to the LANZAROTE FOIL CHALLENGE, the first ultra-long-distance regatta in windsurfing and dinghy sailing. This race comprises an entire non-stop circuit of Lanzarote on windfoil. A sailing a route that should, in theory, be 80 nm. In reality, turns into more than 200 km and about 9 hours on the board. As the competitors circumnavigate Lanzarote’s dramatic island landscape over the course of one single day.

This regatta is organised by Los Charcos Windsurfing Club, Marina Rubicón, the Real Club Náutico de Arrecife and the Canarian Sailing Federation. Top-level windsurfers from around the world have signed up to take part. Creating a high level of buzz around this international event. Participation is unfortunately limited this year, due to the need to observe COVID-related protocols. This being said, Lena Erdil became the first ever woman to complete the Lanzarote Foil Challenge.

More Quotes From Lena about the challenge:

“On the third upwind leg, shortly before crossing over to the island of La Graciosa, I reached my limits several times. The wind was gusting 40 knots. I got lifted out of the water and crashed with my iQFOiL gear several times. On one of the crashes, I landed hard with my shin on the foil. (luckily, I had the 3mm wetsuit on that saved me from getting a cut). At this point, I briefly questioned whether this might be the end for me but quickly decided that it could not end like this! After each crash getting back up was truly challenging; the water was flying, and the 8m rig was flapping loud and like crazy; it suddenly felt heavier than ever.”

“Since I was always quite far behind the boys, I didn’t get any rest between the different legs. Only stopping to quickly refill my camel bag and eat some bars and energy gels. On the last downwind, my legs were burning so much that to keep going. I had to adopt a very different stance than usually. I started standing straight on the board….”

“Sailing to the starting line in Costa Teguise, I catapulted over an old fishing net. Trying to free myself because of the swell. I got so entangled in it, that it took me about 15 minutes to free myself. Because of this incident, I missed the start of the next leg. Consequently, the race committee stopped waiting for me on the penultimate finishing line. Furthermore, I had to sail the last two legs without any stop to the finish.”

“Knowing I couldn’t give up at any point. I had the opportunity of saving 500kg of trash from going to the Ocean if I managed to complete the rounding.”

“The conditions on the north shore were so rough that NOT CRASHING became the only thing I was focusing. While crossing the huge mountains of water in some 25 knots.”